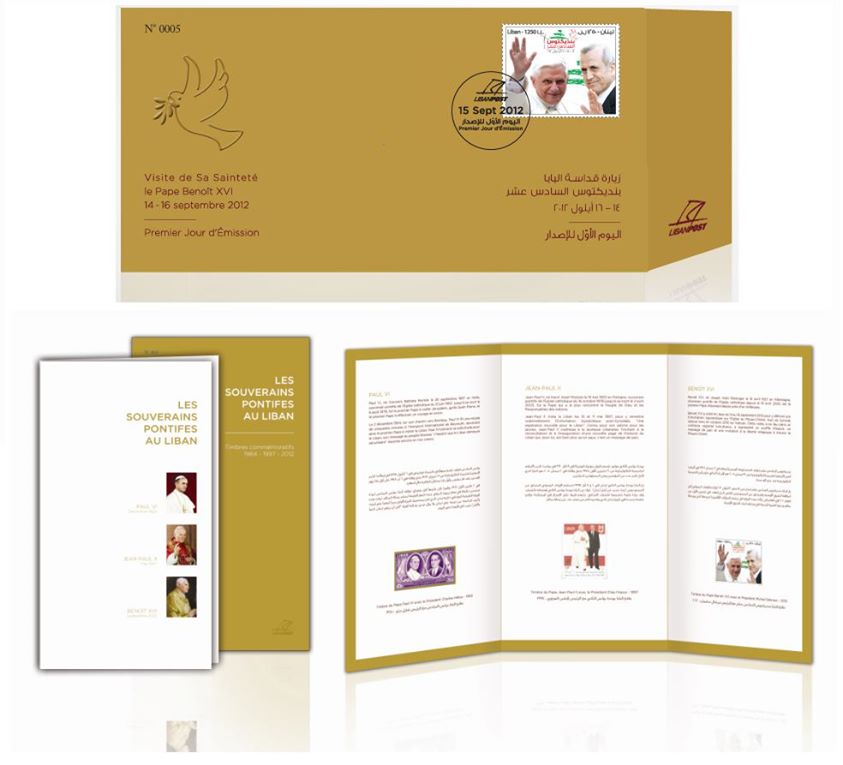 LibanPost, in collaboration with the Ministry of Telecommunications, will put into circulation a new commemorative stamp themed Pope Benedict XVI’s visit to Lebanon as of September 15.
For this occasion, LibanPost has prepared the following products:
- First day cover sold at 20,000 LBP (equivalent to 13.3 USD)
- The collection “Popes in Lebanon” that includes the three stamps issued for the Popes who visited Lebanon (Paul VI in 1964, Jean-Paul II in 1997, and Benedict XVI in 2012) sold at 150,000 LBP (equivalent to 100 USD)

These items will be available starting September 15 at all LibanPost offices or you can order from abroad by emailing us at: libanpostphilately@libanpost.com. 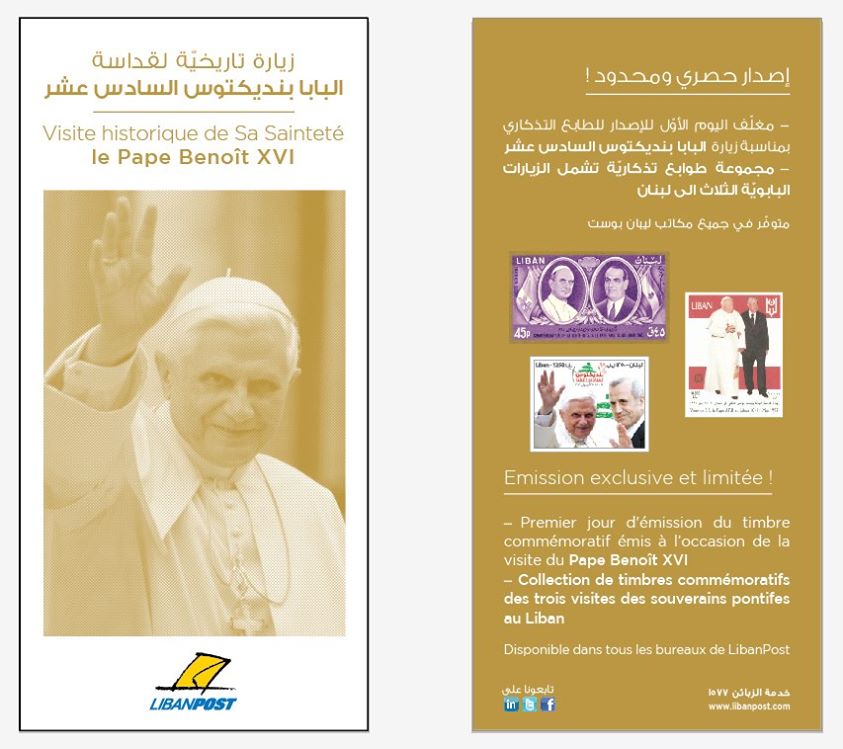 From the dawn of civilization, humans needed to communicate over long distances.

Email is but the latest form of communication. Before email, people used to communicate by letters . Letters are sent via a global postal system. Stamps have been used since 1840 to pay for postage. The first stamp is ever issued is UK’s

Philately (from French philatélie) is the study of stamps and postal history. The term was coined by Georges Herpin in 1864 to describe the nascent hobby of collecting and studying stamps. Philatélie is a composite words of phila (attraction) and atélie (derived from Latin ateleia) to mean free of duties. Before the invention of stamps, the receiver of a letter used to pay upon delivery.

The first stamps used in Lebanon date back to the same era.

Ottomans, rulers of Lebanon in the 19th century, permitted some Western countries to set up foreign post offices in the Ottoman empire and in particular in Lebanon. In 1863 the first Ottoman stamp (tughra) was issued.

Ottoman and foreign post offices continued to operate in Lebanon until World War I.

Upon the defeated the Ottomans, in 1919, allied troops occupied Lebanon.

In the 1920′s administration of Lebanon was assigned to France by the League of Nations.

Hence began the Mandate period. Stamps used during the mandate period changed as the political transformation of the Lebanese territory took shape. T.E.O stamps were quickly replace with French stamps overprinted with O.M.F (Occupation Militaire Francaise). O.M.F. stamps were then replaced in 1923 with Syrie Grand Liban stamps for a brief period. These were the last stamps share between Syria and Lebanon.

1924 ushered in GRAND LIBAN overprinted French stamps. In 1925, the first stamps designed for Grand Liban were issued including perhaps the most gorgeous cedar stamp. In 1927 The Lebanese Republic was declared, while still under mandate, and so Grand Liban stamps started to be overprinted with Republique Libanaise. In 1930 the first stamps were issued for the new republic. This political-philatelic state of affairs lasted until WW II. One of the most memorable Lebanese stamp was issued in 1944, to commemorate the anniversary of the independence with an overprint of 22 November 1942, in Arabic in President Bechara Khoury hand writing.

The post WWII era, and especially sixties, was the most prolific in terms of quantity and quality of stamps issued. This included some of the prettiest stamps. This era of ended abruptly with the onset of the civil war. Stamps were stollen during the war, forcing authorities to reissue stamps with a security background to distinguish new stamps from stollen ones.

In the nineties a moderate number of new issues were released, largely reflecting personalities and events of the decade. In 2005, following the assassination of Prime Minister Rafic Harriri, a new political order took over. The new political order showcased its martyrs through stamps. Even when power changed hands in the last couple of years, the output of new issues continued to be strong and culturally varied.

By the time this writing is published, a new set of stamps would have been issued featuring Lebanese intellectuals, Amine Maalouf, Said Akl’s, Ghassan Tueni, statesman Adel Osseiran, and commemorating Pope Benedict XVI visit to Lebanon.

In July 10, 1968 Lebanon issued an airmail stamp commemorating the Third World Lebanese Union 1968 congress. The congress was held at the UESCO palace in Beirut and attended by President Charles Helou. Interestingly the year printed on the stamp 1967 was incorrect. [insert conference photo] Emigrant congresses were previously held in Sao Paolo and Miami. The organization with world offices was named the World Lebanese Cultural Union.

Philately as a hobby for new generation